How Long Do CDs and DVDs last?

Posted by Simi for BargainShopUK on January 24, 2017 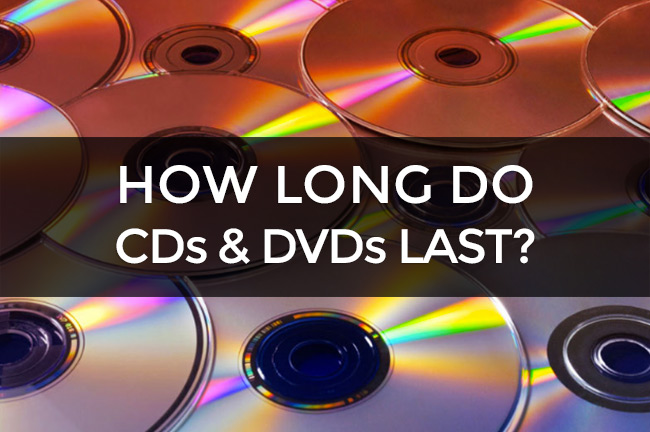 CDs and DVDs have existed for years and almost everyone on Earth owns at least one of both. As fun as they are to have as a keepsake, they are known to wear out after a long period of use.

In this article, we will explain how long CDs and DVDs will last for a long period time and how they should be treated and how to help your collections last.

The Beginnings of the CD and DVD

Let’s go back to the beginning when the CD and DVD mediums were introduced.

The CD-R (then known as the Compact Disc or the CD-ROM) was created in the early 1990’s as a way of replacing the Cassette Tape.

The DVD was introduced in the late 1990’s as a gradual replacement for video cassette tapes. CD and DVDs were created as a way to expand the data life of video and sound.
By 2003, CD-Rs had sold 7,150 million copies while DVD-R sold more than 400 million copies. Both disc types are used as storage devices to archive all different types of files.

There are many ways in which CDs and DVDs can be used and first, it is necessary to know what types of CDs and DVDs there are before you go about copying things over to any CD.

While there are many types of CDs and DVDs out there, there are also many different uses for them. Here are just a few:

If you are using CDs and DVDs, there are a couple of fool proof ways to ensure that the data life is good.

The first point was a little joke. The second point is the more practical one.
Japan produced and wrote the first discs and the data on these discs are in fact still very much in working order.
However, there are others that do not think about how their users store the media on the disc.
CD-Rs were produced in the early 1980’s and are now considered to the predecessor to the double layered DVD+R discs that exist today.
Upon the disc testing being completed, media manufacturers have to ensure that the discs have been tested with the procedures of the International Standards Organisation (ISO) and that are of ISO quality.
The ISO has found that their document and data life can survive between 50 years to that of 200 years. However, it is to be noted that there are differences between the quality media company and the low budget media establishments.
There are different variations of the various manufacturing procedures associated with the media format.

An example of testing a disc would be if you placed a DVD i.e. The Good Dinosauror Inside Out in a DVD drive to see if they are working.

While it is not necessary to understand the advanced workings of any form of disc, a user will need to have an understanding of what makes a quality disc that will be able to be read years after we are all gone.
One of the common beliefs that users seem to have are that DVD-Rs are basically another version of the CD-R. This is incorrect though, they are different but they share similarities with each other.
Discs that allow data to be copied onto the medium begin with a piece of polycarbonate substrate that show where the grooves on the disc are moulded while there is a dye layer that is followed by a layer that is reflective. These layers are then followed for a few protective layers.

When it comes to the quality of media, it is essential that they do not want to lose the information.
There have been claims and beliefs of many consumers as to what is best when keeping the information on tact.
Discs are known as to rot which can be very bad for the disc. Earlier LaserDiscs were known to decay and ruin the information. Newer discs like CDs and DVDs day do not affect the media that is on the format. This is called Delamination and oxidation.
For any person that is reading this article is probably frowning and wondering what the heck Delamination and oxidation are and what they do. Let us explain.
Delamination and oxidation occur on the edge of a disc when the adhesive is not applied properly and cured in the correct way during the process of production. This normally occurs when manufacturers are price oriented, are 2 to 3 generations in age and use manufacturing equipment of the same age. Cheap materials are also utilised.

When you purchase a product, you would expect quality. However, if you purchase a product, like a CD or DVD, you might not get the expected 50-100 years of data life like it is believed.
The biggest danger is the longevity of the information that is stored on the discs. If the discs are left in direct sunlight, it can cause damage that can add stress to the disc’s material. It will also cause the disc to warp.

Does and Don’ts when Handling Discs

While not all discs are great to use work, those of us here at BargainShopUK believe that is not wise to cross the quality with low prices. However, they are a reliable medium for irreplaceable data like family photos. We highly recommend that data be backed up on another medium just in case of emergencies. It is also important to consider the quality of the data when it comes to such data.

If you have any questions be sure to contact us through this post or through our regular social media channels.